Published January 5, 2021 in No category 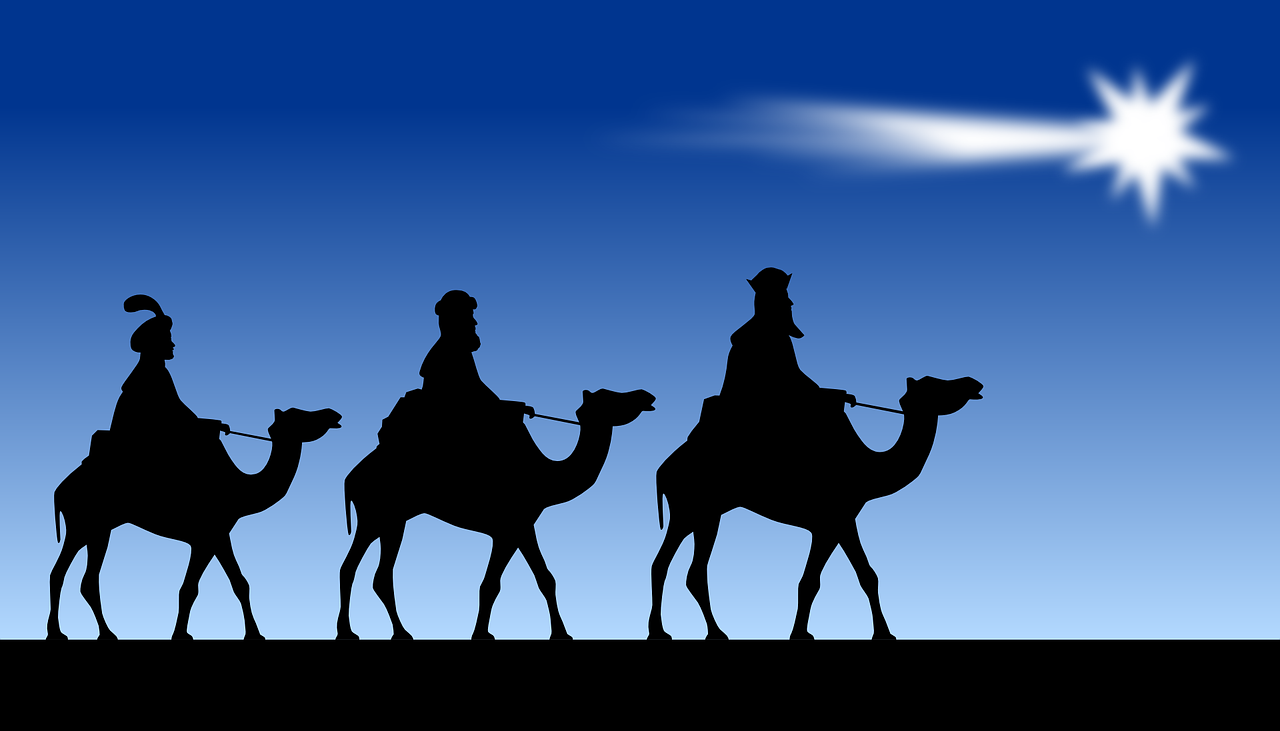 “We Three Kings of Orient are bearing gifts we traverse afar…”

Tonight, the Three Wise Men will pay us a visit, and therefore tomorrow is Epiphany: for that reason, cities, and villages all around Spain will be flooded with parades to spread the spirit of Their Majesties. Three King’s cake is also eaten, which is a bagel-shaped cake usually filled with cream that represents their journey to see Baby Jesus. While some disagree as to whether you eat it for dinner after the parade or for breakfast the next day, we can all agree that either way it’s delicious with a cup of hot chocolate. Before going to bed, many families leave their cleanest shoes under the tree, so that the Three Wise Men from the East leave them presents. Also, children usually leave a glass of water for the camels and a glass of liquor and some sweets for the Kings – leaving all those presents in just one night is thirsty work! The next morning, if we’ve been good, we’ll see that Their Majesties will have left us what we asked for in our letter under the tree (and with a little luck, a bit of coal candy, which is TO DIE FOR).

Obviously, you’ll already know that this is a Biblical tradition, in which three men in strange clothes arrived in Bethlehem to give presents and adore the so-called “King of the Jews”. They were of different ages and ethnicities, and it’s also believed that they came from different areas, which represented the known continents of that time. Maybe you even know that they were called “Wise” because that was the name given to astrologers and fortune-tellers in that era. Last but not least, you’re bound to know that their gifts to Baby Jesus were gold, frankincense and myrrh.

Maybe something that you don’t know is the origin of the parades themselves: while the exact starting date is unknown, there is written proof of a parade celebrated in 1866 in Alcoy (Alicante). However, the first official, national parade wasn’t recorded until a few years later, in 1885. While some even believe that parades were celebrated before then in places such as Barcelona and Granada, this is the official version at the moment. This first parade in Alcoy was organised by a group of young people to collect food for the poorest children and workers in the village. Although it’s a Christian tradition, its origins are secular, and it has become more popular than religious over the years. In fact, years after, the Alcoy parade joined forces with the Moors and Christians celebrations, so that each troupe could dance before the floats of Their Majesties from the East.

What should be included in a perfect parade? Although in recent years characters from children’s TV series have come onto the scene and it seems like absolutely anything is accepted in the procession, it’s true that there are some elements that are essential for any parade, and without them, things wouldn’t be the same.

Obviously, the showstoppers are the Three Wise Men themselves and their pages, who usually close the parade. There must also be a Star of Bethlehem to guide them to Baby Jesus. We can also find shepherds, along with their sheep; chestnut sellers who give the spectators bags of chestnuts; laundry women dressed in typical clothes of that era; real ostentation including exotic animals and wealth, and so on. Dances and music of all types, usually performed by groups from local dance schools, are also not to be missed: ballet, batucada, African dances and music, just to name a few.

Let’s not forget the sweets, and lots of them! The clever clogs even turn up with an umbrella that they put upside down to catch any sweets that are thrown from the floats. Meanwhile, other children shout the presents they would like the Three Wise Men to bring them (just in case their letters didn’t arrive, you never know): “I want a sewing machine!”, “I want a toy car!” and “I want a doll!” can be heard.

Although, due to the current pandemic, we’ll most likely have to watch the parade on TV from the comfort of our homes, there’s no need to worry. The Three Wise Men will have heard your wishes and will come by your house tonight and leave you presents – that’s if you’ve been good this year. Mums and dads can even throw sweets from behind the television to keep the spirit alive and have fun with the little ones.

What about you? Do you go to the parades every year? Have you already asked the Three Kings to leave you a Gloss It subscription under the tree tonight? Let us know on our social networks – we can’t wait to hear from you! Oh, and don’t forget that you can get a free copy of our Gloss It Resource Guide For Translators when you sign up for our newsletter.